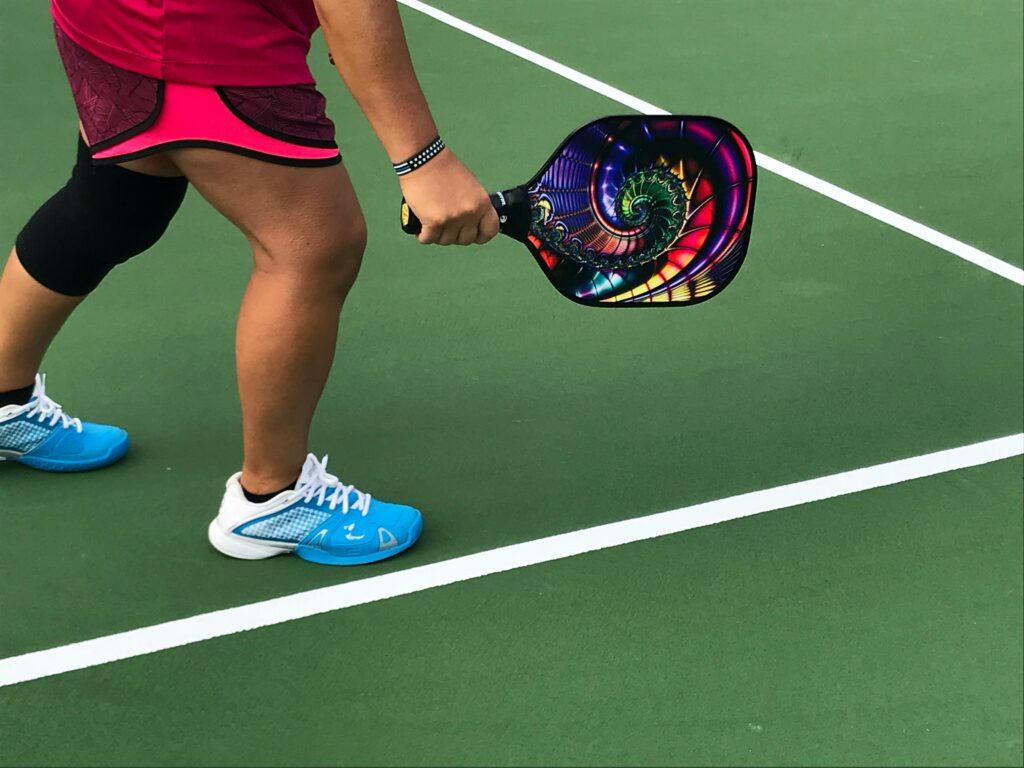 New to pickleball? Once you’ve mastered the complicated rules there are a few other things to learn. Like other sports, pickleball has its very own vocabulary. Here’s some of the current lingo to help you feel at home on the court!

ATP (Around-the-Post) – A shot that is hit around the outside of the net post that then lands in on the opposite side of the pickleball court.

Dead Ball – A ball that is “no longer in play.”

Dillball -Shot that is in and has bounced once.

Dink Shot – A shot executed from around your own kitchen line that lands in your opponent’s non-volley zone. This can be both a volley or hit after the bounce.

Double Bounce Rule – In every point the ball must touch the ground once on both sides of the court before any player is allowed to volley.

Erne – Named after the pickleball player that invented this shot, Erne Perry. The Erne is a volley hit whilst outside of the NVZ either to the left or right of the court area.

Falafel - A short shot due to hitting the pickleball ball with little or no power.

Flabjack - A midair pickleball shot that must bounce once before it can be hit during one of the first two shots of any point - either the return of serve or return of the serve return.

Kamikaze – A player who storms the NVZ line at speed while their opponent strikes the ball.

Kitchen – A slang term for the Non-Volley Zone.

No-Man’s Land – The area on the court between the NVZ line and the baseline. Also known as the “transition area.”

Non-Volley Zone (NVZ) – The 7-foot area at the front of the court. A player cannot hit a ball out of the air while standing in this area. Also referred to as the Kitchen.

Paddle Tap – Pickleball's version of a handshake at the conclusion of a game. Paddle taps are also used as a high five in between points.

Poach – When at the NVZ line, a volley is considered a poach when you move across to your partner's side to play the ball.

Side-out – The transfer of serve from one player or team to the other side.

Skinny Singles – Splitting the court in half, either in a straight line or cross-court to play out points.

Stacking – A strategic formation where you place the stronger shot of each player in the middle. Often used in mixed doubles or if partners are right and left handed.

Tagging – Refers to hitting your opponent with the ball in an aggressive fashion.

Tattoo – The imprint of the pickleball on your body after getting hit with the ball.

Third Shot Drop – Serving team's second shot after the serve (3rd shot of the rally) with the objective of dropping into the NVZ so that the returners cannot attack.

Transition Zone – The area of the court between the NVZ line and the baseline. Also known as no man’s land.

Volley Llama - Term referring to an illegal move where a player hits a volley in the NVZ.

Let us know in the comments below if there are any pickleball words we have missed or if you have variations in your region. Also, if there are any topics you would love to read about in future TopspinPro articles write a comment or send us a message.